Ok, so I just saw a video on the news of Nancy Pelosi telling Bush to "Calm down... there's a new congress in town!" She was chastising Bush for threatening to veto her silly amendments to the Iraq Emergency Spending bill. But, Bush has every right to be a little irate. There are two issues with this bill:

1) The democrats tacked about 80 billion dollars in pork spending--for stuff like fishery hatching and compensation for failed crops--on to a bill that was designed to help our troops. What happened to cleaning up spending???

2) Both the House and Senate drafts of this bill include a DATE when the US will withdraw from Iraq. Wait a minute... that isn't the congress' JOB! They do not run the Pentagon, they just FUND the pentagon. And, if they are going to fund the war, they need to let the generals RUN the war.

This brings a bigger problem that the current Democratic leadership does not seem to get:
We NEED to win this war!

Ok... let me change the emphasis for effect:

We need to WIN this war!

Honestly, it doesn't matter how we declare ourselves the winners, but we must win. Because, the long-term costs of ever saying we have "lost" the Iraq war are greater than we want to bear.

Let's take a quick history lesson. Democrats like history, don't they? Well, actually... not really. They seem to live in a perpetual now, without any historical reference or foresight.

In 1979 the Soviet Union invaded Afghanistan to stomp out a civil uprising. It seems that some young, well-funded Muslim activists were starting to overthrow the existing communist government, and the USSR didn't like that.

Well, after a long, protracted, awful, guerilla warfare battle with the "Mujahadeen" in Afghanistan (which the CIA was supporting... very quietly), the Soviet Union said to themselves:

"Da! This silly opium-filled country just ain't worth it no more." And, in a flurry of indifference, the Soviets withdrew and left Afghanistan to their own devices. For the Soviets... they didn't win, they didn't lose... they just didn't care.

Well, in the vacuum created by Soviet Indifference, the young Mujahadeen declared themselves the victors! "Yay, we won! Yippie, hooray! Obviously that means that our religion and god is more powerful than you heathen Soviets! I wonder what else we can do with this new-found religious power?"

Among those fighters (providing them with both fanatical ideas and lots of money) was a young bearded man named Usama Bin Laden. Because these young violent islamists could declare a "victory" they decided that their cause was divine and, therefore, invincible.

Thus begins a chain of events that led us to the 11th day of September, 2001. Yep... the first seed of 9/11 was planted the day the Commies pulled out of Afghanistan.

Fast-forward to today. We face a similar situation where we ask: "Is Iraq worth it??" I mean, Pelosi and Murtha would love for us to pull out right now and just leave Iraqis to their own devices. It doesn't matter if we win or lose to them... we just need to be out of the fight.

I declare to you, with history on my side, that it DOES matter whether we win or lose in Iraq.

I don't really care what day we leave Iraq. I will leave that choice up to the Generals and people who actually KNOW something about warfare (I am not one of them). But, when we leave, we must depart with our heads held high. We should parade through the streets of Baghdad triumphantly waving the Iraqi and American flags together: 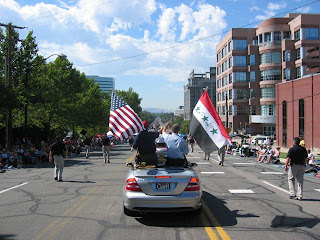 (like this picture... which I took in Utah a few years ago. The two in the car are Iraqi Government Officials waving gratefully to Americans in a Parade).

We must leave Iraq as victors!

If we do not, with one voice, declare that we have done a great thing in Iraq, then someone else will decide who was victorious. And, we do not want to breed another Usama Bin Laden through our pettyness and power-mongering.

The partisanship of this bill, forwarded by Madame Pelosi, just screams "we don't want to win." You are giving people a date when we will leave, without consulting with generals and people who actually KNOW what they are talking about (rather than the weirdos over at MoveOn.org).

I cannot say this enough: We must leave Iraq as victors.

If we do not, the same thing will happen in Iraq as happened in Afghanistan: the small lunatic fringe of Islam and the violent insurgents they support will declare that they won. And, another young Usama Bin Laden will grow to be the next great leader of a terrorist organization. It won't be because America lost... but because America didn't stand up and say: "We won, and if you EVER come back to usurp democracy, we're going to come kick your #$?@&$ again!"

We have done a great thing for the Iraqi people, and it sounds like the surge plan is working as planned. And, hopefully in a few months, we will stand up and say "Mission Accomplished: We gave Iraq a new chance to thrive."

So, I really wish politicians would buck up and agree on one thing:

We MUST win in Iraq. I don't care how we define victory, but we must stand up with a unified voice and claim that victory as ours.

Otherwise, I fear for the future.

That is why I'm annoyed with this bill. It is short sighted, and it doesn't tell people that we plan on WINNING.

So, Madame Speaker, CALM DOWN and start working toward victory.

Handy or Not said...